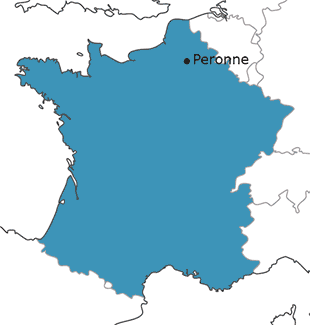 Situated in the town of Péronne, in the north of Paris, the “Historial of the Great War” is related to the First World War and the battle of the Somme in 1916, where British and French troops one the one hand and German troops on the other hand fought one of the most murderous battles of the First World War, with 300.000 dead and missing soldiers. The Historial, developed together by the British, French and German experts, was opened in 1992, and conceives itself “neither [as] a memorial nor [as] a military museum but [as] a museum of mentalities which seeks to show how the cultural representations of combatants and civilians were drastically modified by the war”. The Historial is situated within one of the most impressive memory landscapes in Europe: the former battlefields of the Somme, stretching over 30km, are covered with more than 400 different cemeteries, memorials and monuments related to the battle.

We started with a guided visit through the permanent exhibition which is focusing on social and cultural dimensions of the war and which includes French, British and German perspectives on the realities of the war. We visited also the current temporary exhibition which is dedicated to the missing British soldiers of the Somme, and heard about some pedagogical activities organized for school children by the Educational Service of the Historial, which aim to give an universal vision of the war and a critical perception of war propaganda. The group went also to see two sites of the former battlefields of the Somme from 1916: the South-African Memorial in Longueval, dedicated to thousands of South African soldiers who died there, and the Thiepval Arch dedicated to “The Missing of the Somme”, the 70.000 British soldiers who died in the battle and whose bodies were never found or identified.

Pictures of the visit:

Thiepval - Monument to the Missing 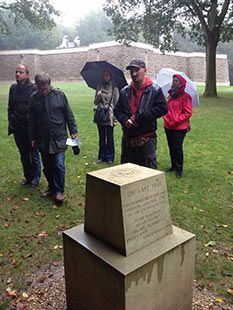 Peronne - Exhibition in the Historial

Peronne - Entry of the Historial.jpg 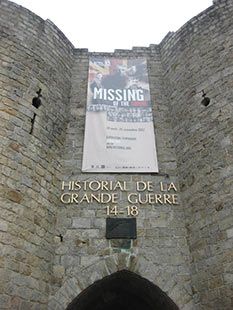 Peronne - Historial of the Great war.jpg

Thiepval - Monument to the Missing of the Somme 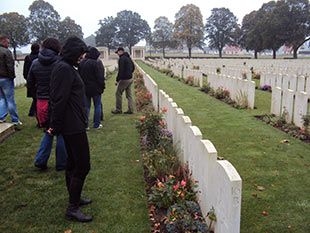 Péronne - Exhibition in the Historial

The website of the Historial (in French, English and German):
http://en.historial.org/

Information about memory sites related to the battlefields of the Somme:
http://www.greatwar.co.uk/places/somme-monuments.htm

Information about the Thiepval Memorial on the website of the “Commonwealth War Graves Commission”:
http://www.cwgc.org/find-a-cemetery/cemetery/80800/THIEPVAL%20MEMORIAL